Lacuna Collective on Nothing Civil IPA 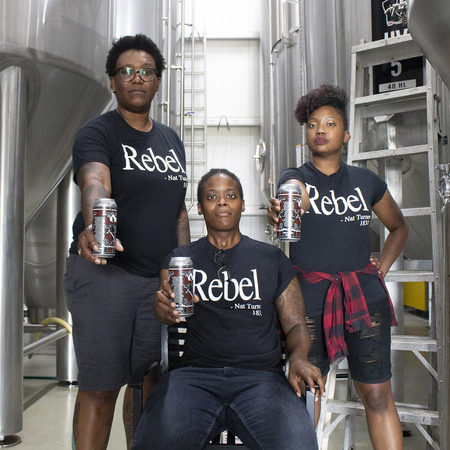 We’re excited to be releasing another batch of Nothing Civil IPA this August with 100% of the profits going to support the Black Health Alliance. First released in the summer of 2020, Nothing Civil was created in collaboration with the Lacuna Collective which includes: poet and beer enthusiast Truth Is ... , beer sommelier Lexi Pham, and Beer.Diversity founder Ren Navarro.

Nothing Civil is a liquid protest with powerful artwork and a poem written by Truth that appears on the front of the can. This beer is a call to action meant to confront white supremacy, racism, and police violence.

With 100% of the profits from this beer going to support Black-operated charities, in 2020 Nothing Civil raised $5,415 for Black Lives Matter Canada. With the return of Nothing Civil this August, 100% of the profits will be going to support the Black Health Alliance, an organization committed to improving the health and wellbeing of Black communities.

The folks from the Lacuna Collective took some time to answer a few questions and to share some background about the work they are doing and the story behind Nothing Civil IPA.

Can you tell us a little bit about the Lacuna Collective?

We’re three badass, take-no-prisoners Black women. Lacuna Collective is the missing piece in the craft beer industry that doesn’t really acknowledge or have space for BIPOC, LGBTQ2IA+, and disabled people. The Lacuna Collective is about events, advocacy, and education.

Nothing Civil IPA has been described as a “liquid protest” - can you share some background about the creation of this one-of-a-kind beer?

100% of the profits from this year's release of Nothing Civil IPA are going to support the Black Health Alliance. Can you tell us why you chose this charity?

Black mental health matters. It’s like it’s dangerous to be Black in medicine, because it’s not just mental health, it's about Black health which has been largely ignored by society. We’ve all personally had experiences going into hospitals where it’s like a miracle that we've all survived. Black health isn’t at the forefront in ways it should be - there are misdiagnoses and we’re accused of just being there for the drugs.

Black health needs to be funded properly. We need to understand that in the middle of a pandemic, who’s vaccine hesitant? It’s BIPOC communities, because it’s not explained to us about why it’s important. And we’re kind of scared because of the historical track record of medical experiments with Black people.

The August release of Nothing Civil IPA is timed up to coincide with Nat Turner Day. Can you elaborate on this choice and why it’s important?

It's the Nat Turner rebellion in a sense, which was the first successful rebellion against slavery. Now it’s a different kind of slavery - mentally and systemically enslaved. It’s our time, it’s time for a wake up call, it’s time to rebel.

What’s next for the Lacuna Collective?

A nap. We’re tired, emotionally, mentally, and physically. But we’re always plotting to take over the beer world. Keep your ear to the ground, you’ll know when it happens.

Nothing Civil IPA is available now from Wellington Brewery (both online and in-store) and at select bars and restaurants.

Here is the powerful poem written by Truth Is, that appears on the Nothing Civil IPA can:

Everything you can see about us has been recognized as suspicious

has been diagnosed as a threat

has been taught to be feared

Our skin is Nina on the stage

Our skin is Diallo reaching for his wallet

Our skin is Martin holding skittles

Our skin is Malcolm speaking at the podium

Our skin is Vincent and Wayne on their podiums

Our skin is the real McCoy

Our skin is Emmett’s face

Our skin is Mamie’s face at his funeral

Our skin is jogging

Our skin is sleeping

Our skin is Rosa on the bus

Our skin is Nelson’s prison sentence

Our skin is Sandra’s prison sentence

Our skin is breathing

Our skin is calling our mothers

Our skin is resistance