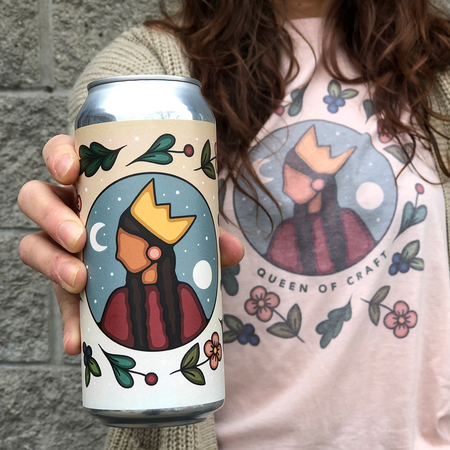 Thanks to your support, this year's Queen of Craft events and fundraising projects raised over $6,500 for Guelph Wellington Women In Crisis.

2021 has been a year of learning and adapting for the Queen of Craft Crew. After deciding to run their annual March programming virtually, they came up with events that they hoped would give craft beer fans something to look forward to after a long year of social restrictions. Over four fridays in March, these virtual events helped to lift spirits and strengthen this growing community of craft beer lovers, who found themselves mixing beer cocktails, dabbing beer bingo cards, and sharing cheese and chocolate pairings with their loved ones, all in the comfort of their own homes.

Each year, the group chooses a local artist to create a design to be used on the Queen of Craft beer label as well as on merch items.  This year they chose Alanah Astehtsi Otsistohkwa (Morningstar) Jewell, a mixed French-First Nations artist and Bear Clan from Oneida Nation of the Thames. She is an illustrator, painter, and muralist who also organizes local Indigenous Art Markets in the Kitchener area.  Alanah created a stunning label for the Queen of Craft Witbier with Flowers, which was also used for a run of tees that sold out quickly.

During the entire month of March, all profits from the Queen of Craft virtual events and merch sales as well as a portion of the proceeds from the Queen of Craft Witbier with Flowers collaboration went towards this fundraising goal. The donation also includes donations that were accepted all month at the checkout of Wellington Brewery’s online store. Thanks to everyone who helped raise funds to support the vital work that Guelph-Wellington Women in Crisis do in our local community.

The quality programming was made possible by the following speakers, educators and makers who kindly volunteered their expertise:

"We are so grateful to have the support of so many incredible industry allies who educated, shared expertise, donated products and helped promote the cause.  Organizing these events reminds us of the solid relationships we've formed with other Ontario Craft Breweries and Influencers to create positive change in the industry. Special thanks goes out to our Queen of Craft crew and Welly for their continued support and belief in the importance of this program from day one, way back in 2013."  - Karyn Boscariol,  Queen of Craft Founder

To celebrate the hard work and effort put into this year's series, we are offering 20% of all Queen of Craft merchandise online with the code QUEENSMERCH at checkout.  Show your support by sporting a custom ball cap or tee and keep your eyes peeled for upcoming Queen of Craft events!