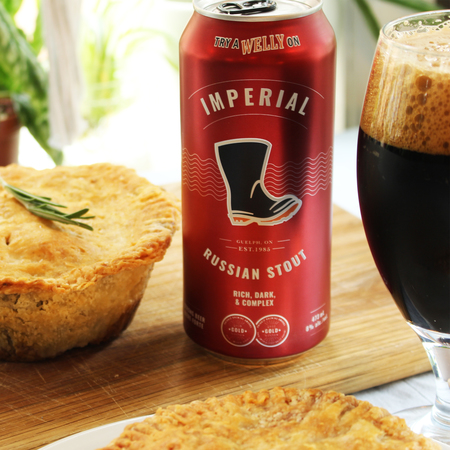 Fall is here and we have the perfect fall recipe to make with and pair with our award-winning imperial russian stout.

This recipe makes two 6” steak pies with a rich, black gravy that sticks to your ribs. It’s the perfect fall warmer to enjoy with a pint of dark, complex Imperial Russian Stout. 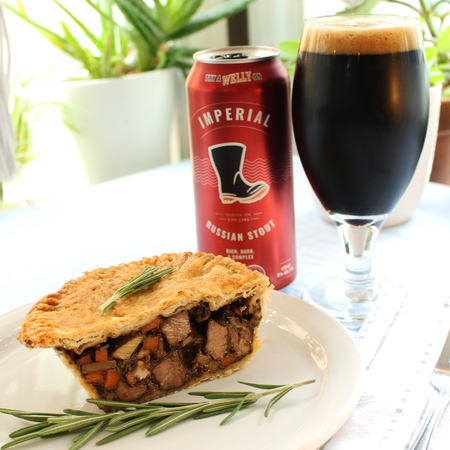 - Combine the flour & salt in a large, steel or ceramic mixing bowl and put in the freezer for 30 minutes

- Add a small amount of ice water at a time and gently mix until a shaggy dough forms. Divide into 4 and return to the freezer for 10 minutes

- Roll out the dough balls into 9” rounds and lay onto a plate with parchment or wax paper in between. Return them to the freezer until the filling is ready.

- Using two pans; begin braising the meat in one pan, allowing a good dark crust to form. In the other, begin browning the onions, mushrooms, carrots and garlic in butter or oil.

- Transfer the braised meat from the pan to the vegetables and keep on low heat.

- In the empty meat pan; on medium-high heat, deglaze with a small amount of the beer and add the butter and 1 tablespoon of flour, cook until the flour becomes fragrant.

- Add in the rosemary, beef stock and the rest of the beer, reduce until a thick, dark gravy forms.

- Add the gravy to the rest of the filling, combine well and add the ketchup, Worcestershire sauce, and parsley.

- Add salt and pepper to taste

- Lay two of the four crust into 6” greased, pie tins, fill with filling then lay the other crust on top

- Poke 2-3 holes in the top of the crust to allow steam to escape.

- Remove the pies, beat an egg and brush on top of the crust before returning the pies to the oven for an additional 10-15 mins or until golden brown.