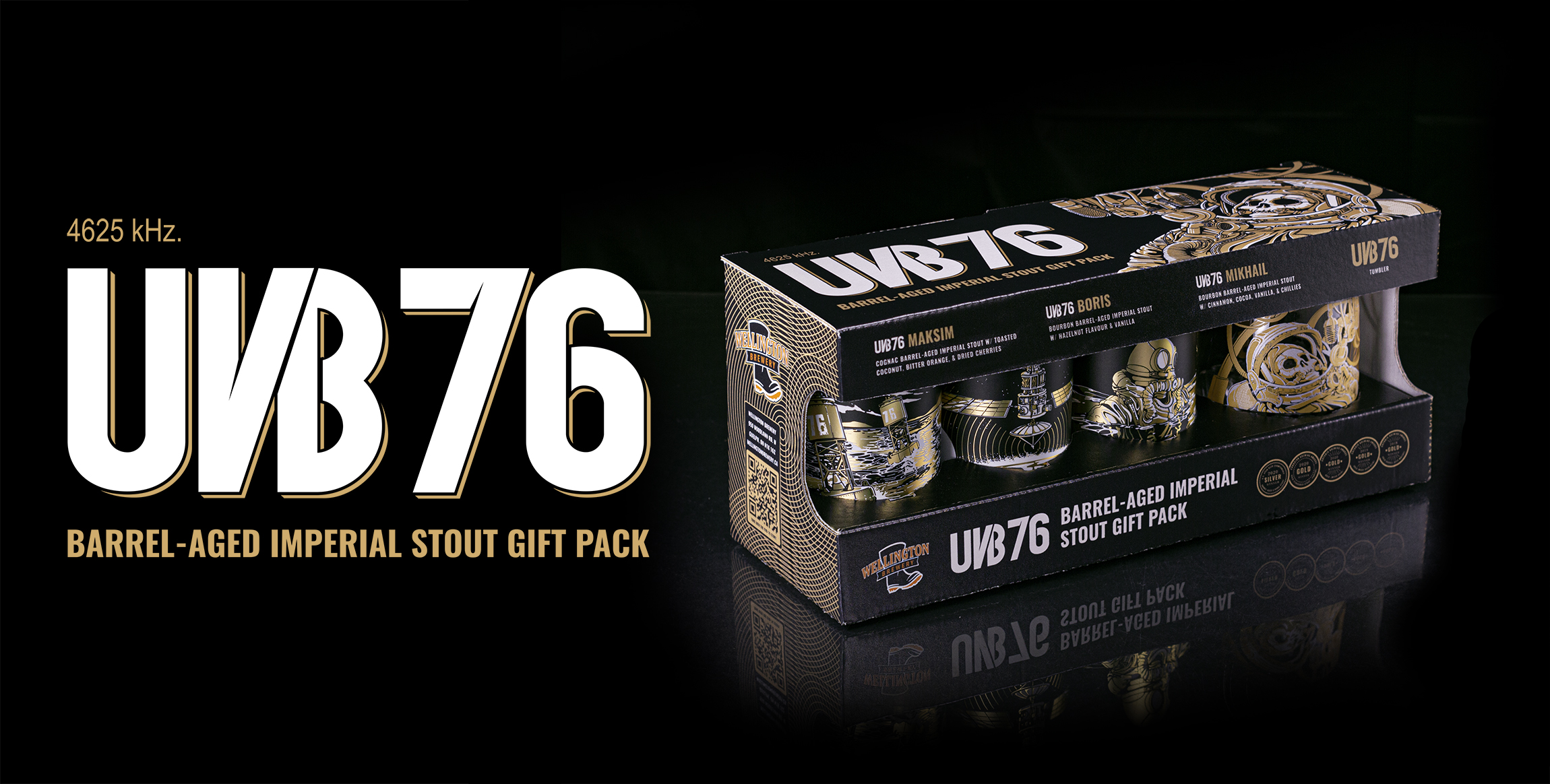 FIND AT THE LCBO

A torrent of radio static is interrupted by a mysterious buzzing tone and occasionally a voice repeating the names: Boris, Maksim, and Mikhail. UVB-76, also known as "the Buzzer", is a mysterious Russian shortwave radio station that has been broadcasting continuously at 4625 kHz since 1973. Inspired by this cryptic radio transmission, brewer Jeff Wilson has created an annual series of barrel-aged imperial stouts with decadent flavour combinations.

This year marks our 5th annual UVB-76 release, so we’re revisiting some fan-favourites in this limited edition gift pack. Taste them side by side and explore the bold and enticing flavours of these massive barrel-aged imperial stouts in a custom UVB-76 tumbler glass. This year's installment of the series includes:

Plus we have a limited release of the original straight bourbon barrel version, UVB-76 Roman available as a single can from our brewery.

The UVB-76 Barrel-Aged Imperial Stout Gift Pack is available now from our brewery along with a limited number of single cans including the original straight barrel-aged version, UVB-76 Roman. You can also find the UVB-76 Gift Pack at select LCBO stores across Ontario while supplies last.

LISTEN TO THE UVB BUZZER

We sat down with Head Brewer Jeff Wilson to discuss this year’s UVB-76 release and discuss what goes into creating these huge bourbon barrel-aged beers in this Q&A:

This year marks the 5th year of UVB-76 Barrel-Aged Stout releases, tell us about why this was a good chance to take a look back and revisit some classic UVB-76 variations?

After 5 years of UVB-76 there have been many hits and even a few misses. I thought it was important to celebrate this anniversary with some of our award-winning and fan-favorite UVB variations.

Last year's releases introduced a cognac barrel-aged version of UVB-76, how does a cognac barrel compare to a bourbon barrel and would you look at using other spirit barrels in the future?

Cognac barrels are really fun, they give a beer tons of butter, vanilla and caramel notes work well on their own or with other flavours. In the future I would like to see a Rum barrel-aged version of UVB or potentially something a little more out there like akvavit or Islay scotch barrels.

When it comes to adding flavours to barrel-aged stouts, where do you start and what’s the goal?

It's all about accenting the beer going into the barrel and finding flavours that play off of each other. If the beer is maybe showing too much of one flavor, then finding a way to calm it down or pair it is the goal.

Of all the UVB-76 variations, what’s been your favourite?

I'm kind of a purist so the straight barrel versions have always been my favorite especially Dasha (straight cognac barrel). If I was picking one of the flavoured variations I would have to go with Daniil (apple cinnamon).

Any recommendations for folks that are new to the UVB-76 series or barrel-aged imperial stouts in general?

First of all, I would say make sure to share with friends! These are big boozy beers and they can sneak up on you real fast. Other than that, I always suggest getting a couple of each variety, one to drink fresh and one to age and drink in a year (yes, barrel-aged stouts age just as well as wine). Remember to take your time with these beers as they can open up more when they warm up and show a whole new side to them. Sip slowly, pair with doomy metal, and enjoy!

Be sure to grab your UVB-76 before it’s gone for the season. Order from our online shop or find the UVB-76 Barrel-Aged Imperial Stout Gift Pack at select LCBO stores across Ontario. Cheers!