Our Sparkling Hop Waters, are unique non-alcoholic beverages that have been a long-time staff favourites around the brewery. With no calories, sugar, or flavouring added, These refreshing and unique sparkling waters are a healthier and refreshing non-alcoholic alternative that can be enjoyed anytime, anywhere!

With No Calories, No Carbs, and No Alcohol at 0.0%, Sparkling Hop Waters are made with 100% Ontario-grown Cascade and Chinook hops giving them fresh local hop flavours! Our unique process uses Biotransformation and dry-hopping to bring out the bright citrus and pine notes and reduce hop bitterness with the help of a touch of yeast. 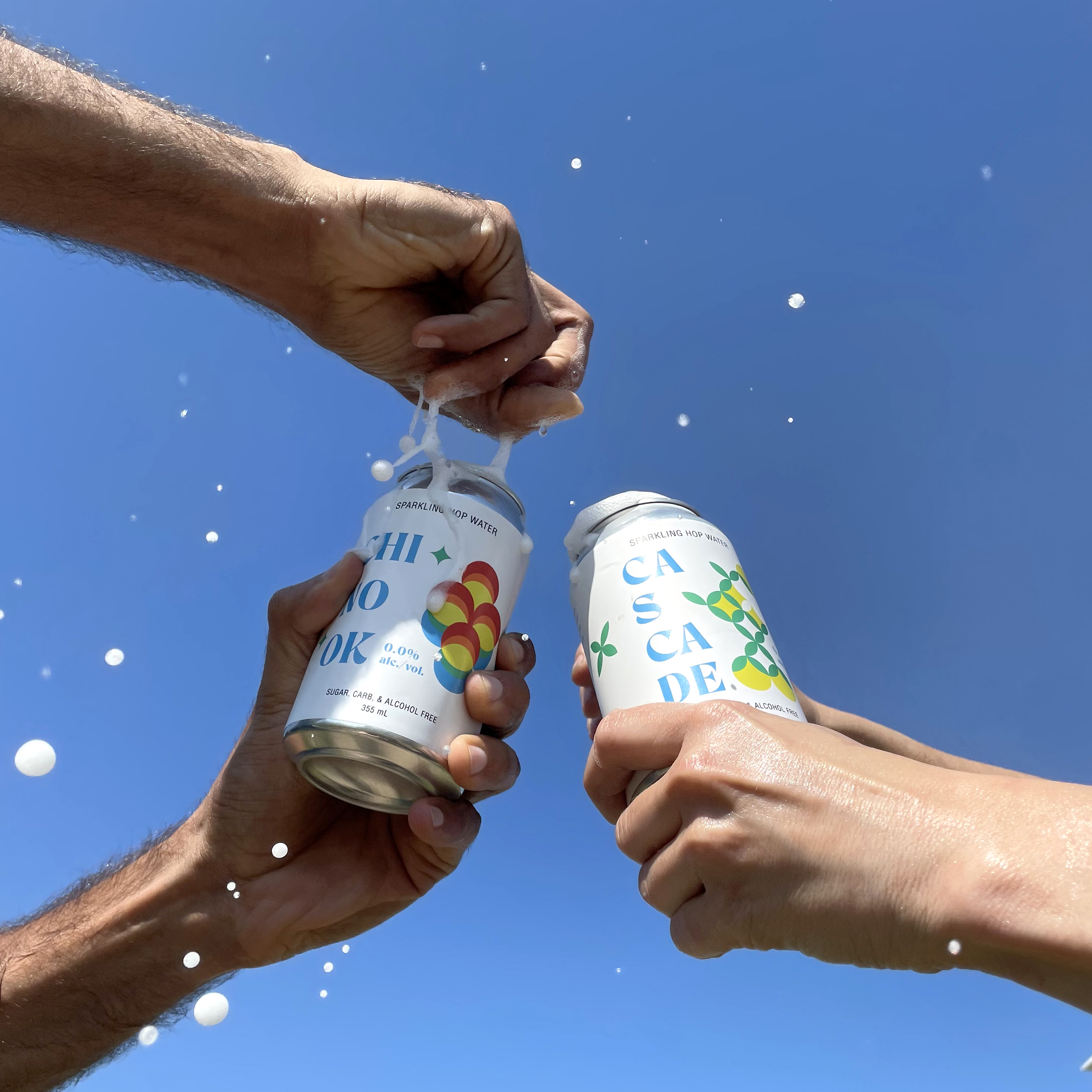 Who will enjoy these?

• Beer drinkers looking for a healthy “anytime” alternative - with lunch, at work, on the beach, or out boating, the opportunities are endless.
• Craft Beer lovers who are unable to have alcohol, choosing to avoid alcohol, or simply looking to cut back.
• And this isn’t just for beer drinkers, and with 0.0% alcohol anyone looking for a unique and tasty sparkling beverage can enjoy these, even people who don’t enjoy the taste of beer!

Get Sparkling Hop Waters delivered fresh, to your door! Enjoy the taste of locally grown Ontario hops in this super refreshing, crisp and lively beverage with no sugar, no calories, and no alcohol. Anytime, Anywhere.

NO CALORIES, NO CARBS, NO ALCOHOL

We took a few minutes with the Welington brewing team to ask them some questions about the creation of this new Sparking Hop Water, so let’s hop to it...

What is a Sparkling Hop Water?
Sparkling Hop Water is basically just a beer without malt, so we have all the other ingredients without any sugar or calories, and without alcohol. It’s everything that we like about beer but a non-alcoholic alternative when you don’t want another beer.

And where did the inspiration come from to make this?
The inspiration really comes from Brad McInerney, our marketing manager, who mentioned the idea about 5 years ago and then we found the Lagunitas Hoppy Refresher, which made us realize that this may be something that people would like to try outside of our brewery.
We usually have carbonated water on tap for staff, sometimes we add different flavours that we can enjoy throughout the day when you can’t drink beer. We tried adding some hops to the carbonated water and it was a hit with our staff. It’s nice because it has just a touch of bitterness which makes it really refreshing during (or after) a shift on the brew house.

Is this like a non-alcoholic beer?
Not really, because non-alcoholic beer is still malt based and has calories. For us, this was a product more inspired by sparkling water, and then linking that with the beautiful aroma and flavours of hops.

So there are no flavourings added? Why is there yeast?
The yeast helps with biotransformation, a process by which the metabolism of yeast brings out different flavours from the hops. So you get a more complex hop flavour profile without the grassy and herbaceous hop character, and it also brings out the citrus hop notes. We still need to brew our hop water, it takes a quick trip through the brewhouse vessels and then gets dry-hopped in tank where it spends about a week. We’re not just dropping flavouring in this, we’re using real hops.

Why cascade hops? And will you try other hops?
We chose Cascade for this one because we use it in two of our core brands, it’s near to our hearts, and it’s grown locally at Hayhoe Hops in Aylmer, Ontario. We wanted to make this a local product top to bottom with local water, hops, and yeast from our brewery.

We do plan to release some different hop waters that showcase different hops that will bring out different flavours, some that are juicy, tropical, some resiny, and some more earthy. It’s an interesting way to explore the characteristics of different hops and compare them.

What’s the best way to enjoy sparkling hop water?
Chilled and directly from the can or when gardening outside. The great thing about this hop water is that you can drink it anytime, in the morning, over lunch, and anywhere. We’ve also had a few people at the brewery experimenting with using this hop water in cocktails, so really you can try a lot of different things with this, it’s pretty versatile.

Anything else?
We’re curious to see what people think of this. It would sure be great to make Sparkling Hop Water a regular offering from our brewery, especially in the summer, because this is one seriously refreshing non-alcoholic alternative! 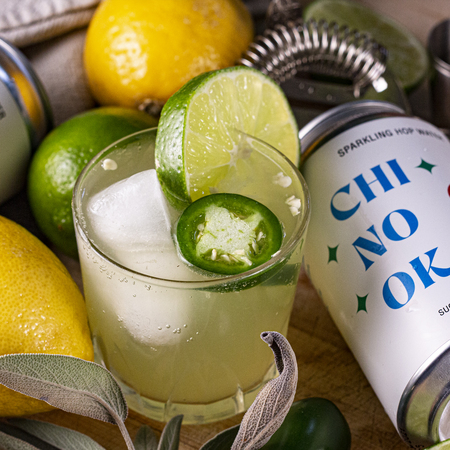 Get creative! Try using these Sparkling Hop Waters as
a mix to create unique cocktails. We teamed up with Bartender and Mixologist Katie Shewen to create this zesty and spicy WESTERN BREEZE cocktail featuring Chinook Sparkling Hopwater and a fresh and vibrant SUMMER THYME SPRITZ cocktail featuring Cascade Sparkling Hopwater. Try making these cocktail with a Non-alcoholic spirit for a true N/A recipe or sub in your favourite spirit for the perfect refreshing celebration. These refreshing beverages pair with almost anything so weather you're just adding a simple wedge of citrus or trying out a mixologist masterpaice, really the sky's the limit! 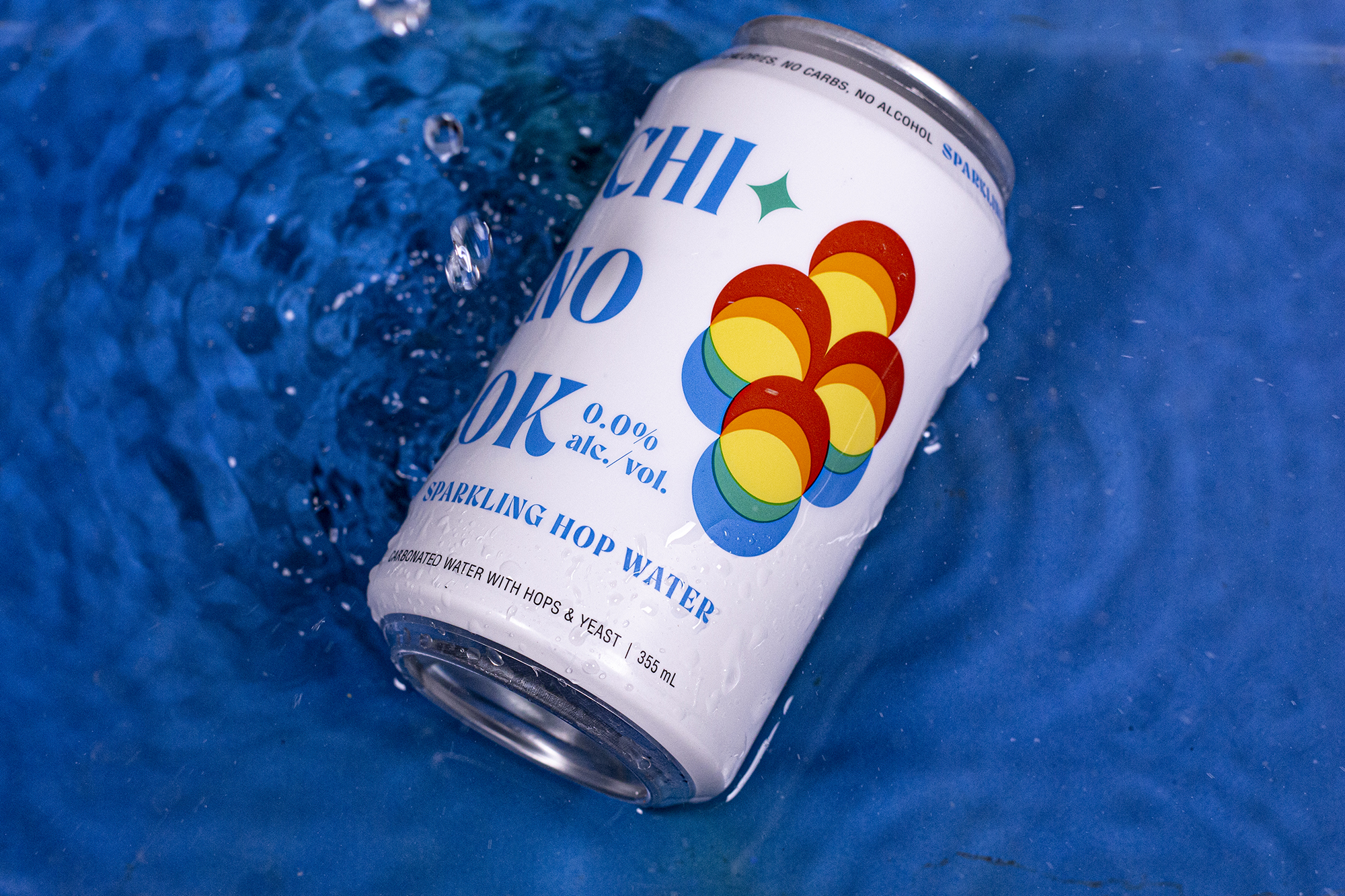 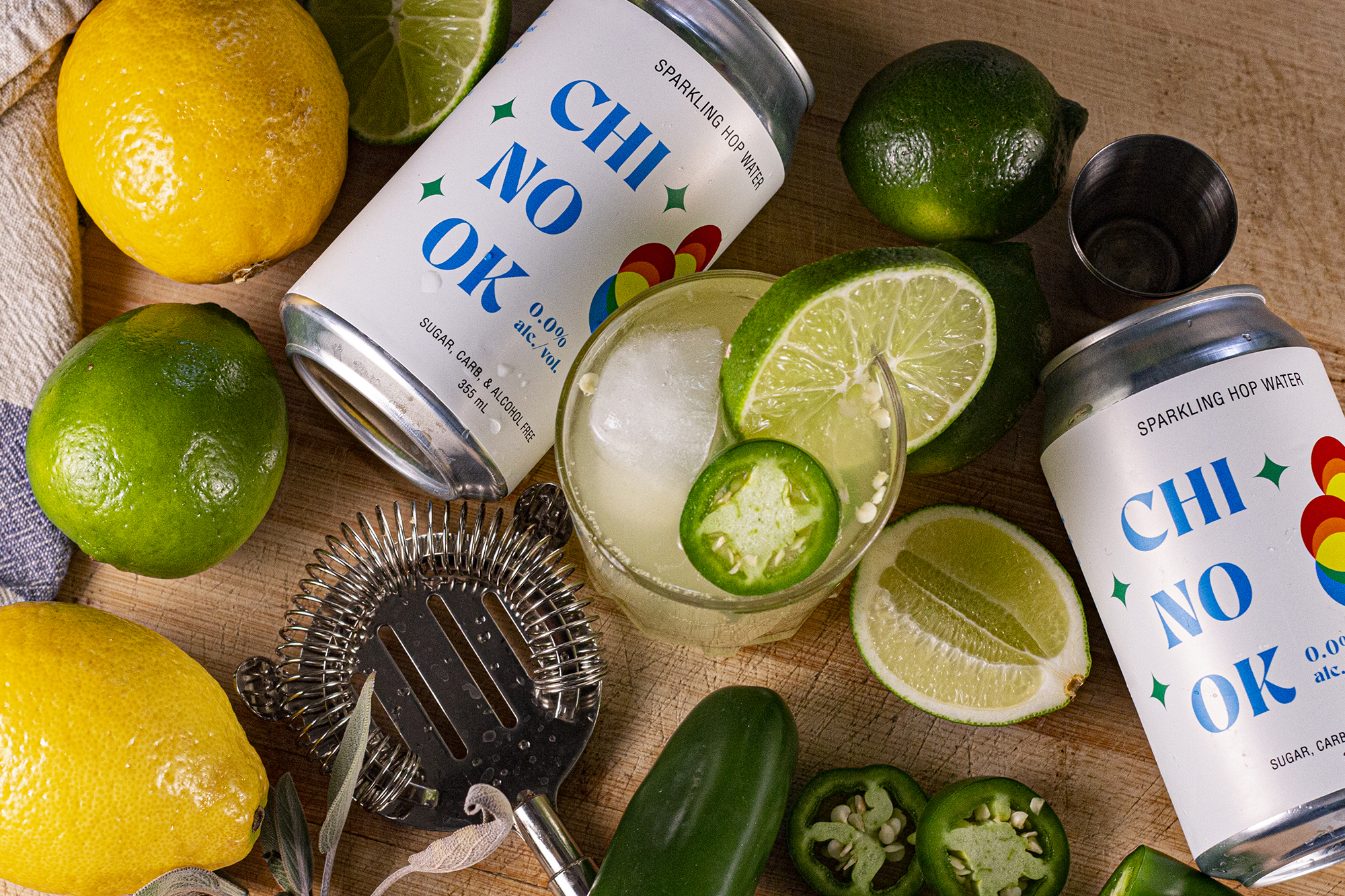 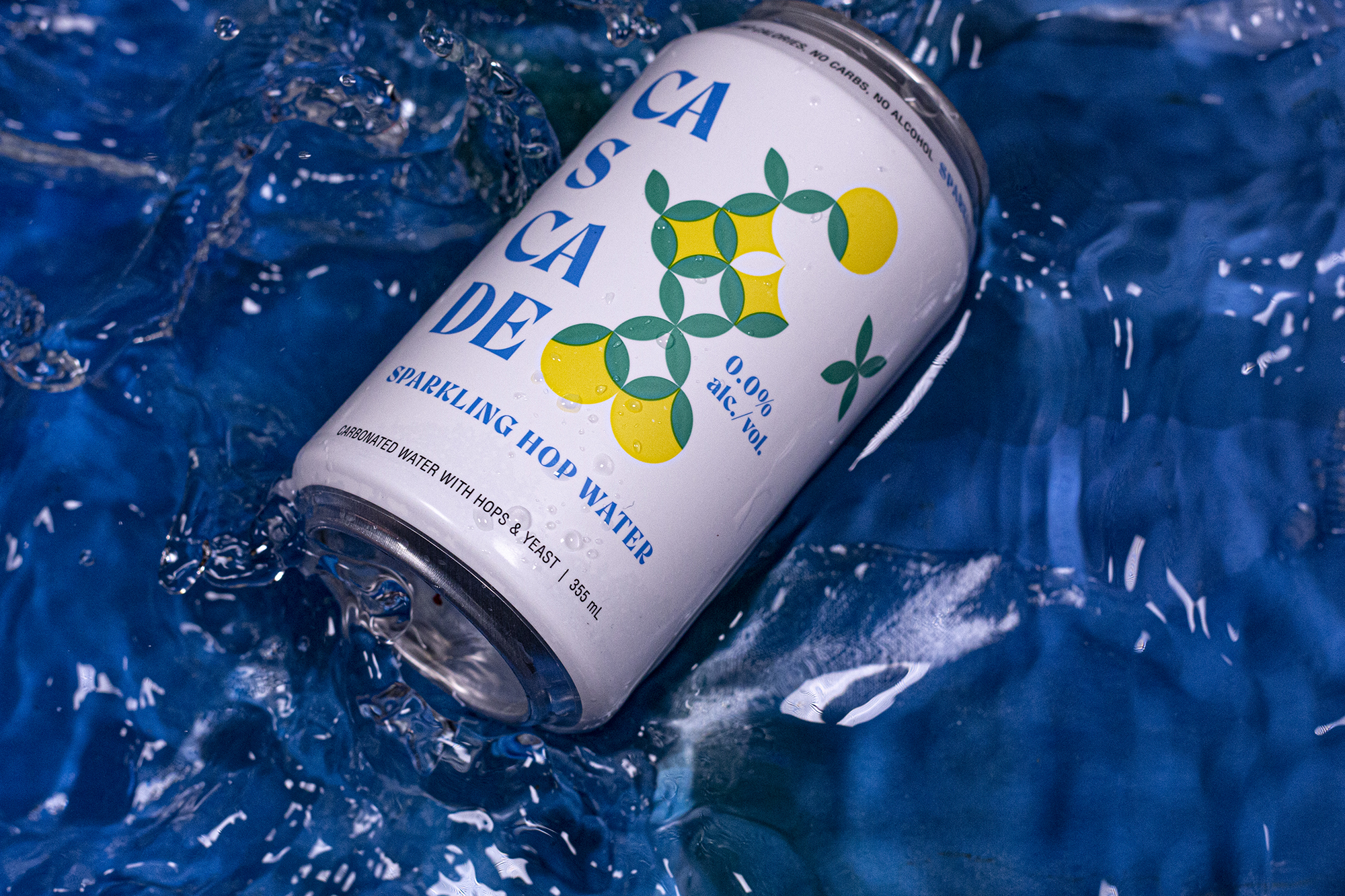 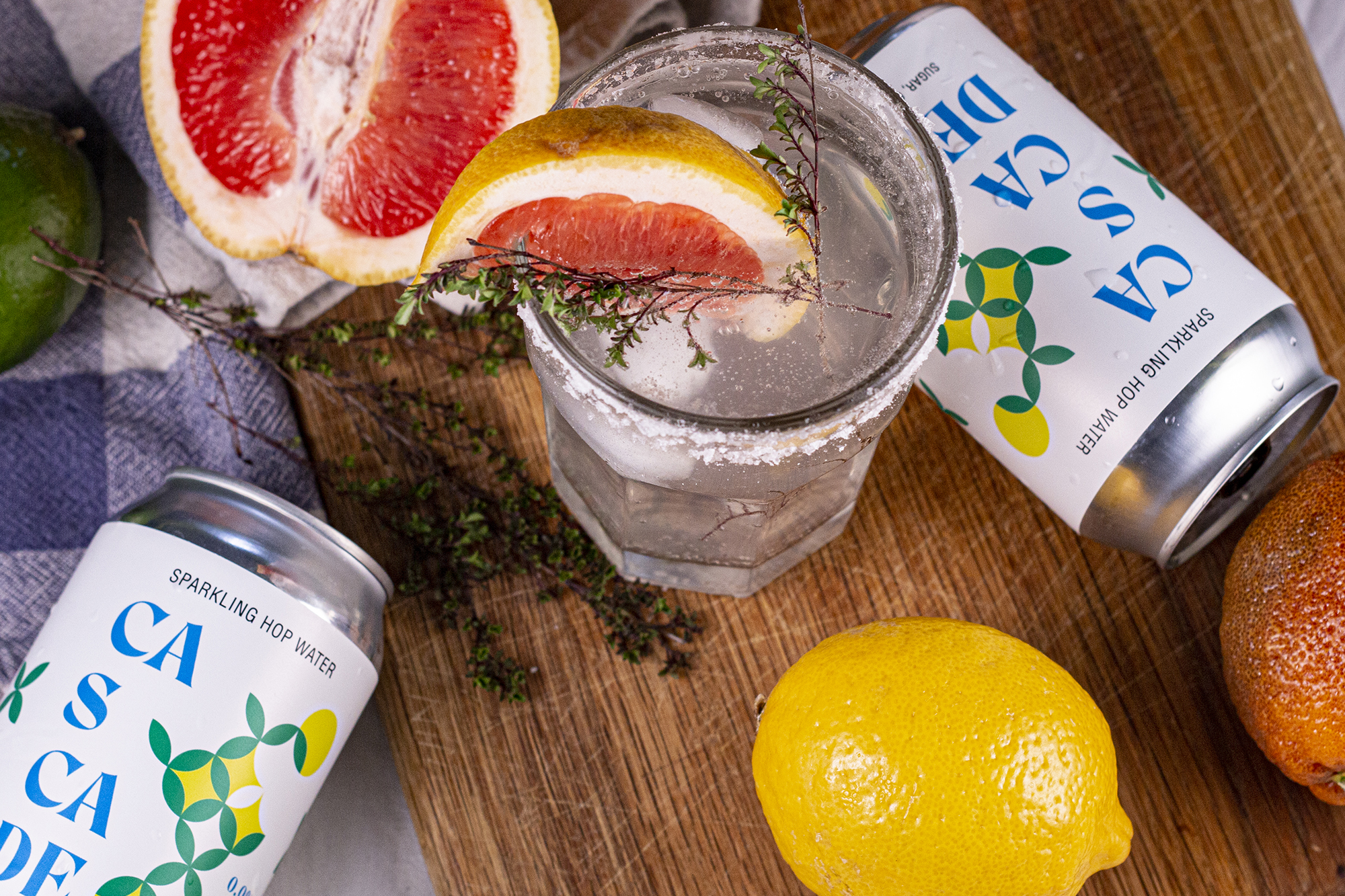 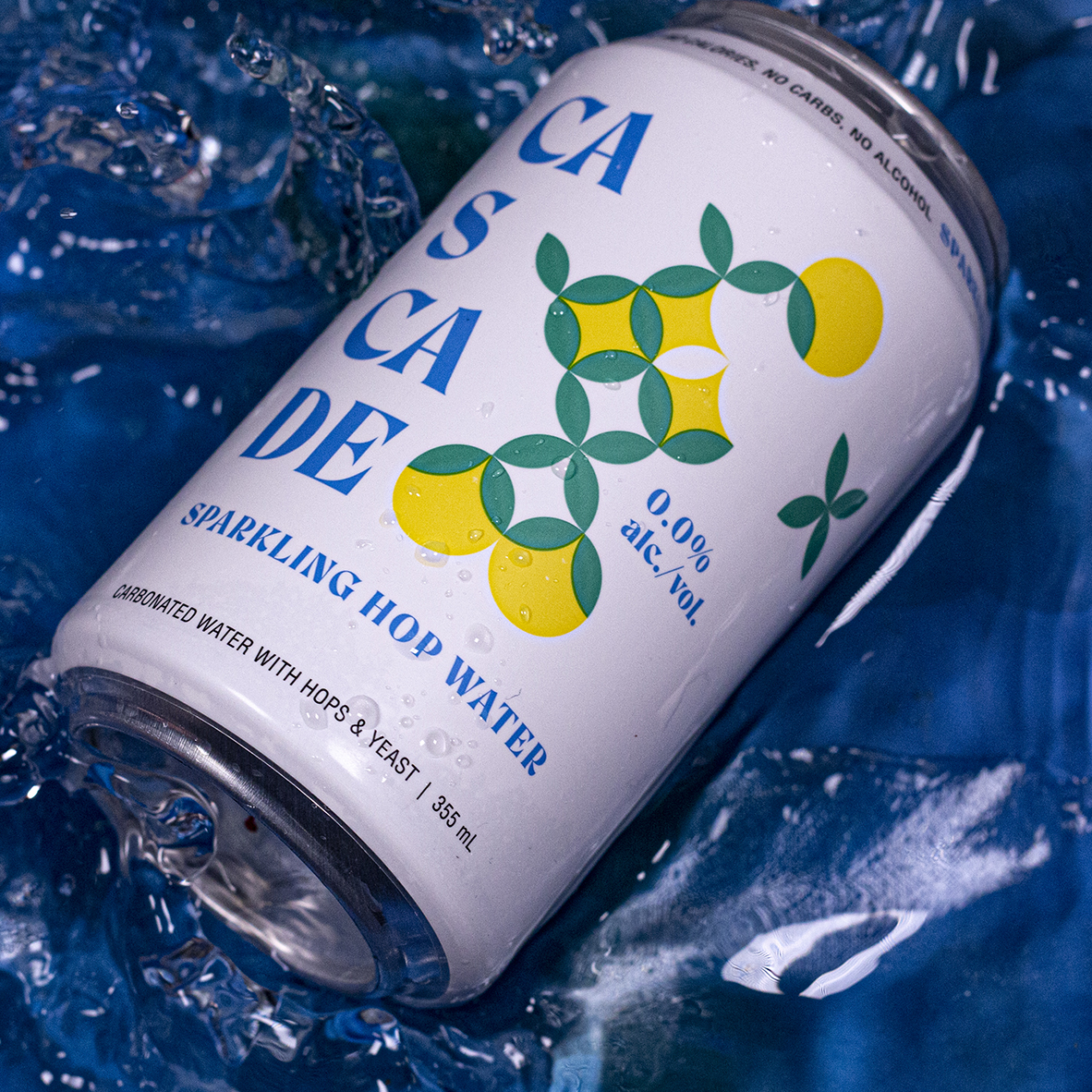 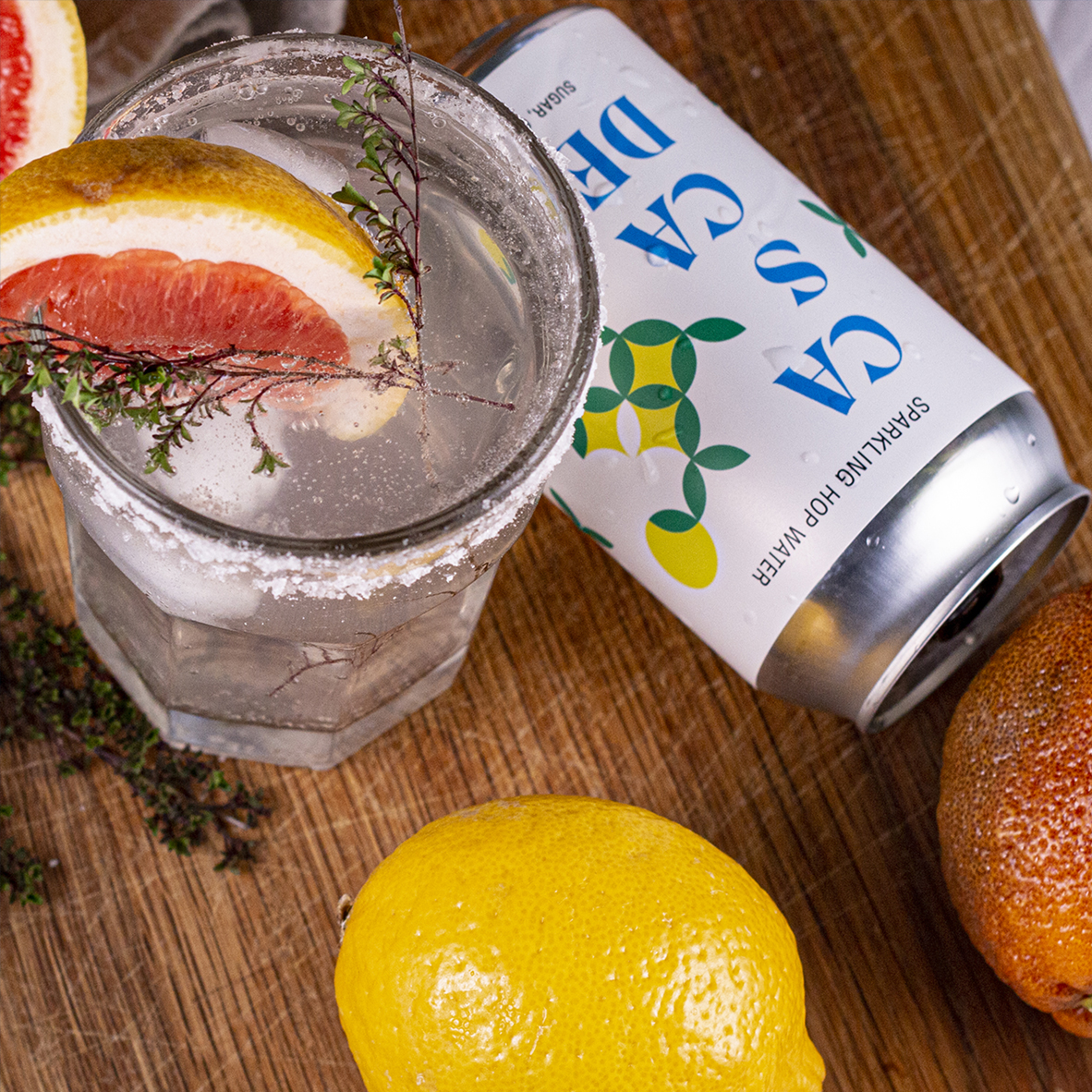 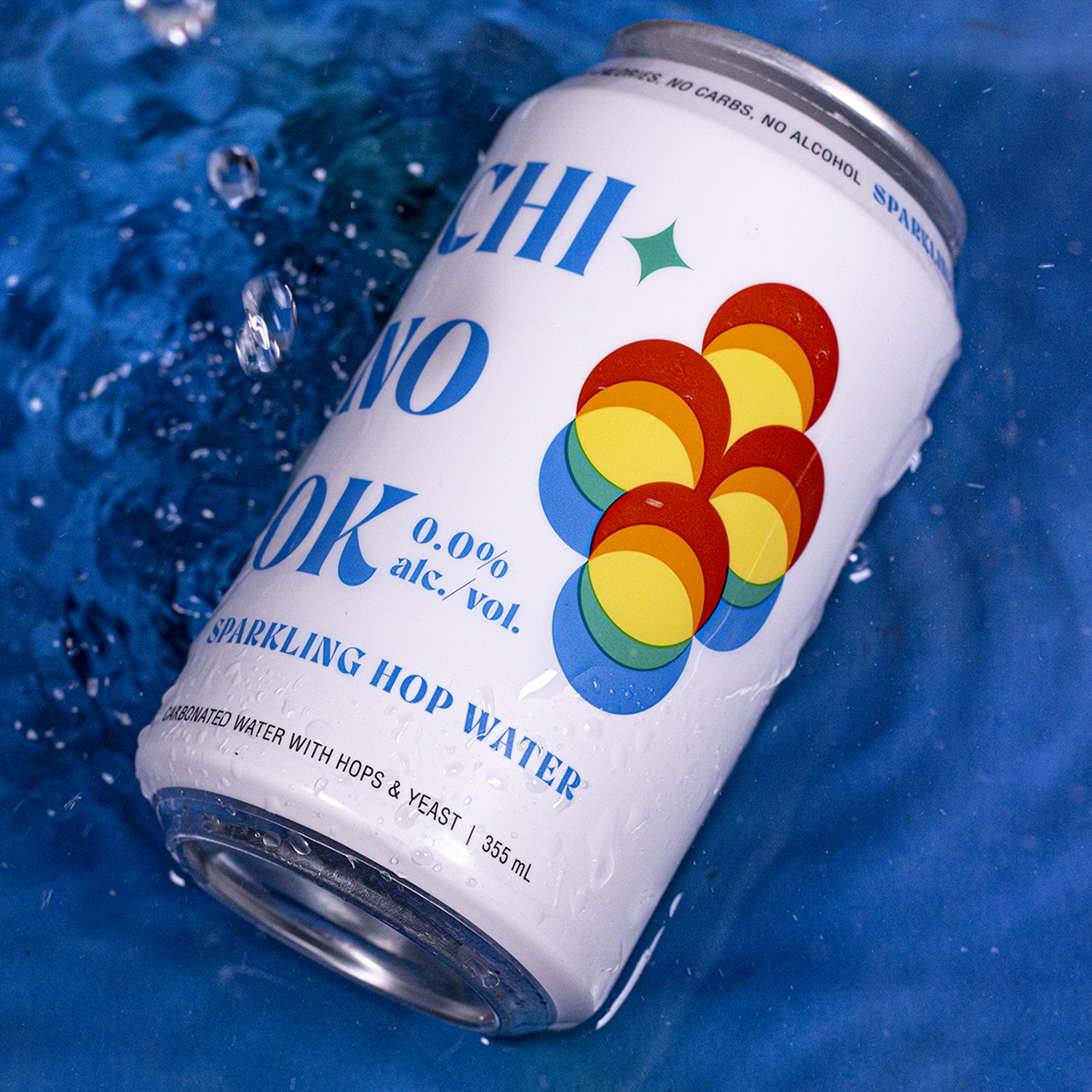